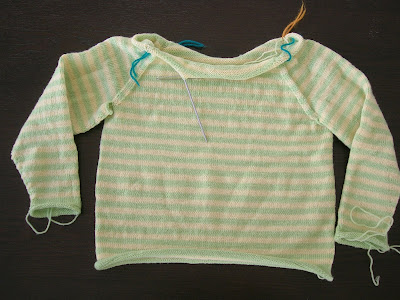 We are getting very close now. In this photo, the pullover only needs the collar to be finished but I've actually finished that since the photo! It is now only a matter of sewing down the edges and blocking and then it is all ready for the bubster to wear to Montessori preschool! So he can paint all over it! (maybe not....)

It would be a great knit to wear to church with Grandma. It could serve a two fold purpose as a result. 1. Grandma could show off her favourite grandson! 2. She could also show off her daughters knitting prowess! But unfortunately, to go to church with Grandma would mean hopping on board a plane, then traveling through the air for 14+ hours to LA where we'd have to go through the nasty customs queue which is horrid, then run like hell to our connection flight, fly up and down, up and down for about 6 hours before eventually arriving at Grandma's little house in South Dakota. Whew.

We had a great time when we were there about 6 months ago and the bubster, who was 2 and 3/4 at the time, did really well, despite all the unpleasantness that goes along with travel; like the nasty looks from other fliers who don't want a kid on board their flight, or the 45 minute+ long LA customs queue which causes us to be horribly late for our connecting flight, or the really unpleasant LAX security people who, during a terrible backlog of fliers waiting to go through security (all of whom are looking at the parents with the 2 year old like they are demons from hell because another security person, who was very sweet, allowed us to jump ahead since our connecting flight was boarding), make parents wake up their 2 year old who is completely zonked in the stroller, make the groggy two year old stand up, request the parents take off their 2 year olds belt, remove his little 2 year old shoes and make the now cranky 2 year old walk through the metal detector by himself and everyone knows you can't make a 2 year old do something he doesn't want to do!! Especially if you are not very nice or at all patient about it and there are other lovely travelers saying things like, 'Come on!!" "I've got a plane to catch!!", like it is the 2 year old and his parents fault that this enormous international airport that services the world only has a couple of security scanners operating. (Yes, I was annoyed. But I smiled sweetly and made sure I looked like a doting mummy and well, too bad for them if they want to spend time being irritated with us)

But once we were at Grandma's, we put all that behind us and enjoyed the Autumn. Magnus accompanied Grandma to church every Sunday and did quite well through the services, sitting next to Grandma. He seemed to sense that this was Grandma's domain. Or perhaps it was the thought of chocolate cake at the end that kept him going.....

I wish we could visit frequently and easily!! Kids need grandparents around!!
Posted by Karin at 9:09 AM