A Mothers Day for all 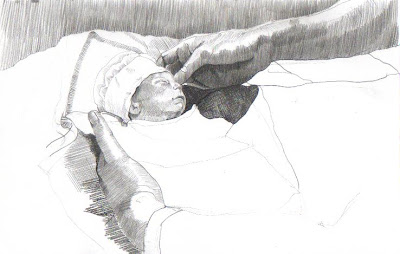 Heloise Quince Meagher; Born and died, 15 March 2002
Drawn by me, after her death

It was Mothers Day over the weekend. For many, it is a day of celebration, joy and fun. But for bereaved mothers everywhere, it's a poignant day filled with mixed emotions and contradictions. Early in my own grief, I felt mocked by the day that seemed to so pointedly leave me out. It was, quite simply, very painful. Every mother who has held their child in their arms while they die, or gave birth to a child who has died, or lost a child early in pregnancy is still a mother. Death does not sever this bond.

Some people think it does, though. A bereaved acquaintance was given a gift at work, only to have the coworker hastily reclaim it, saying, "Oh I forgot, you're not a mother." My acquaintance's child who had died didn't figure into the equation of Mothers Day for this carefree gift giver. It's hard to imagine being comfortable with that level of detachment and insensitivity, not questioning the pitiful limitations of one's own hardened heart. Yet not only is this coworker gravely insouciant, she is also ignorant about the true beginnings of Mothers Day. It was about and for bereaved mothers.

Mother's Day was originally called Mother’s Day for Peace. "The first Mother's Day was in 1870, when women gathered to mourn losing their sons in the Civil War. The original Mother's Day Proclamation by Julia Ward Howe from 1870 is a timeless reminder of the profound loss and pain war creates for all mothers, but it also deeply recognizes that from such loss and pain can come a fierce determination and power within all mothers, to join each other, and give rise to the birth of peace."

Mothers Day is about all mothers. I believe motherhood transcends the act of birthing live babies. Webster's dictionary states the meaning of the word mother to be: a female parent; the head of a convent; the origin of anything; characteristic of a mother; native; original; to be the mother or author of; to adopt as one's own; to cherish, as a mother her child. To me, this covers all persons who care and nurture, as deeply personal as caring for one's own child, or as broad as caring for the earth. Mothering takes many forms.

For me this year, my day was gentle and relaxing. For a gift I received a Fender 5 string banjo which was both funny and unexpected. I love it! I enjoy learning new things and I've aspired, since the death of our first son, Soren, to learn something new each year in his honour. This year it's the banjo. I expect to be playing and enjoying it for many years to come.

what a beautiful & gracious & wise mother you are.

Thanks for sharing your story and that beautiful illustration.

I hope the Banjo brings you great joy. What a lovely gift.