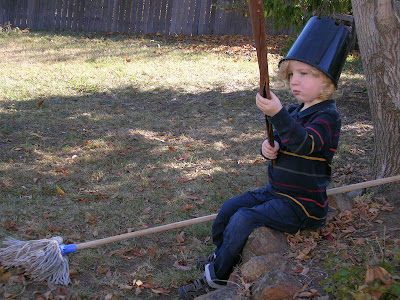 So here's the little lad, doing his lad things. He's a stick man. All sticks and every stick is his to claim. We spend a lot of time outdoors. A LOT of time.......

Yesterday though, we were indoors working with the homemade playdough. (I love making that stuff!) He's working away when he chimes out with, "Hey. What's that 'smewl' (smell)." I said, "Do you smell something?" He said, "Yeah I do!" Not following where this was going I said, "Well what is it?" He said, "Poo!" I didn't know what he was on about. Did he fart? So I ask, "Did you just toot toot?" He said nonchalantly, "No." I said, "Well, I don't smell anything." He says with his little gruff tough man voice, "I smewl poo and it's coming from here!" He points to his bottom. I swear I didn't know where he was going with this. He's been very independently using the toilet for half a year or more. Again I say, "It must have been a toot toot." He shakes his head.

Then I realize. Oh. He really means he really smewls poo! I ask, "Is there poo in there?" He says, "Yes!"

So he hobbles like a cowboy just off his horse to the toilet where daddy helps him with his pants. It wasn't a lot of poo. I guess it was one of those dreaded misinterpretations of the internal workings of the bowel. A shart as it were. I guess those can be deceptive even to the bigger person. The mysterious internal goings on should never be underestimated.

And a reminder to me, don't dispense of the extra pair of pants in my bag just yet.

Ha Ha! You guys are making me laugh. Oh and I stand corrected by the man of the house, it was a big poo after all. So my thought about it being a shart attack may have been unfounded. But perhaps, when one is a little guy, it's hard to know................

So if you found that story amusing, I have another. I don't think I've written this one down yet and I should, not only because it's fun to remember these mishaps but because it's the kind of thing one may need on hand at the 21st party. Right?

This poo-hap (like mishap only involving poo) happened just shortly after we had moved in - we still had boxes around the joint. It looked like this out by the back door: 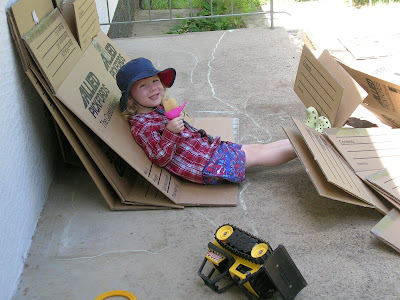 Well, to set the scene, we have to take into account the big wad of keys that we each were given upon signing the lease. We'd been used to having at the most 3 keys on our ring. Now we have something that resembles this: 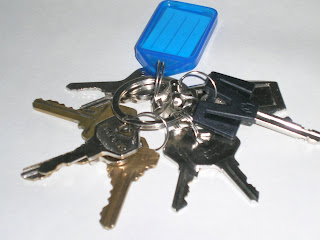 For about a month, trying to unlock the doors was a very frustrating experience. Yeah yeah I know, I could have run out and bought some of those cool colour identifiers for keys so you know which key is for what but it just seemed we'd get it, a lot sooner than we did. Well, I'd hoped I'd get it a lot sooner. The man of the house got it the first day. Of course. Grumble grumble.........

I probably said something not very charitable. But I got myself back on track and said, "Right. Lets get you to the toilet then." "Mummy!!! Poo!!!!" "Yes yes, mate. Yes." "NOWWWWW!!! I'm burscting (bursting)", followed by lots of toe dancing. "Yes bubba Yes!!!"

Meanwhile, I'm struggling with the wad of keys while I trip over empty boxes that the boy had arranged so nicely around the door. Dang it, I'd locked the screen door. Is it the silver or the gold key for this one? And which silver or which gold one. Ok, I got that one. I think? No it's upside down! Damn it all to hell!

I continue my struggle with the keys. I'm going to @#$&* win this! Finally, I get the door open. "Ok mate, lets make a run for it." I hadn't noticed that he'd stopped his dance and hollering.

"Oh, it's otay now Mummy. It brote (broke) off in my pants." I about popped an artery in my attempt to not laugh uproariously. I said,"Oh it did? Oh ok, well lets carry on." He says brightly,"Oh, I don't have to poo anymore, Mummy!" "Well bub, maybe not but we need to take care of this." "Oh! otay....." He does his cowboy walk to the toilet.

"See Mummy? It brote off!" "Yes I do see....." He sits down on his little ladder toilet seat (highly recommend for boys). "Mummy! I have more!!" "That's good mate, that's good. See you never know. And that means you were able to hold in some until we could get to the toilet. That's good work!" He beams. "Ummhumm." Then makes his poo face.

too funny. i blogged about sticks today too :) just a little bit.

I had to stop myself from laughing out loud and waking up my household.

Your blog always makes me laugh, cry, wonder and contemplate. You are such a great storyteller. I wish you could pop around for coffee and a gift exchange.

I definitely want to see you sign up for my next Art Swap.

I assure you that if you don't need the extra pants for poo, there are plenty of creeks and mud puddles to fall into that will keep them handy for awhile! I still have photos from my 4th bday party where Alden Parker is in his boy clothes in one photo and then some corduroy apple bell-bottoms in the next, poor thing. :)

Sooooo funny. I'm still struggling with my son who always desn't want to go to the toilet before leaving...

Bigcat told you what I just want to say...make me laugh, cry...

I'm looking forward to your new story,beautiful pictures and your fabulous works...with a English-Japanese dictionary in my hand!!

Check out some of my links for great crafters. I've been wondering if you've made more dolls. I owe you an email!