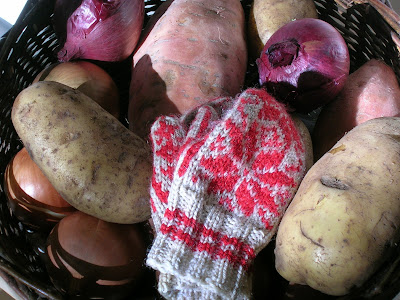 If like myself, you've been wondering where on earth it could be that your 3 year old has put his (ahem, your) precious vintage Norwegian mittens, have you checked the potato basket?? That's where all good mittens go for a nap.

The Bubster is becoming the Jokester. Here is his latest while out to dinner tonight:

Then, I over heard this conversation tonight, catching only the middle onwards:

Daddy: And what animal is that?
Bub: A tiger.
Daddy: A tiger. Ummm.
Bub: Yes. If a tiger came into my class I'd push him and shove him out the door so he didn't scare or hurt us. Rrraroourr. I 'tan' do it.
Daddy: Oh! Have you had many tigers at school??
Bub: Mmm! Not for 'tuite' (quite) a long time!

Then yesterday at music class, he got into a little argument with his buddy about the illustrations in the children's book the teacher was reading. The teacher had asked, "And what can you see here?", as she turned to the final pages of the book. The bubster had been enthusiastically answering all the questions and so continued,
"Oh! It's a 'tow' (cow)."
His buddy chimed, "No it's not. It's a horse. That down there is the cow!" (true, it was.)
The bubster, defiant, cross, "No it's not a horse! It's a tow!!"
His buddy, indignant, "No! It's a horse!"
Bub: "A TOW. It's a TOW."
Then he explained, "Not all tow's are the same. Some tows have brown spotteds and some have blackt spotteds. This is one of those blackt tows."
He shrugs his shoulders and waves his hand as if to say, that is the end of it. His buddy fell silent.

Meanwhile I'm dying, trying not to laugh - I wasn't going to correct him and thankfully, no one else did either. We'd been reading "The Cow Who Fell in the Canal" and that cow is a Holstein so yes, it's black and white. The horse in the book in question was black spotted, which did look very much like a 'tow'. I gotta admit, one doesn't see too many Pinto horse around these parts. Seems they could have gone for a more classic brown. It didn't turn into a knock down fight so all and all, it resolved well, although his buddy may be wondering why everyone thought the horse was a 'tow'.

LOL! I love the age of three!

That last story is the funniest. I wonder what important secret men's business he has been up to.