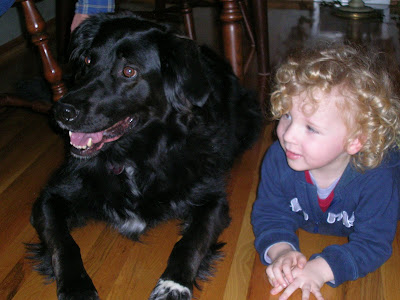 The Bubster recently has been enjoying the song Bingo.

Here is his version:

I was corrected several times. "No mummy, it's not 'DINGDO', it's DINGLE. DINGLE."

It was only a few weeks ago that I learned that 'Snorty', the bunny at preschool, actually goes by the name 'Snowy'. I like Snorty better so we keep calling him that instead.

Karin...I read this just befrore going to bed last night. As I tidied the last few things and stacked the dishwasher I had B I N G O going round & round my head.

Love it when they make up their own words. It's such a fun time and gives us some insight into that little world we have forgotten. Magnus is brilliant

What a cincidence! Daichi also enjoys the song BINGO he learned it at English school.
When my son can say correct words, I'm glad to see his growth but also I miss his unique words I'll never hear again...

Seriously, I could suck his cheeks off. How do you stand it? He is *so* adorable!!!!