Well, sick again. You don't want to know about the substance coming out of my nose. Believe me.

As I write this I am listening to the soundtrack to 'Oh Brother Where Art Thou?', the Cohen brothers film. It is on the track "Keep on the Sunny Side of Life". That makes me smile. It's such a great track, some lovely subtle banjo playing in the background.

Remember, I received a banjo for Mothers Day. How's that coming you may ask?? I've yet to search for a teacher but in the meantime, I'm slowly picking away. I'm not ready to do any videos for you yet (she says tongue in cheek). I found this guy on line - BanjoTeacher.com Looks like some good stuff. DVD's are really helpful. I have one for our ukulele and within a few minutes, we were strumming away.

But back to the cold. The only explanation I can come up with is that I'm being exposed to a whole crop of germs through Magnus and preschool. I seem to contract something every few weeks. It's kind of depressing.

And then I face taking care of the bubster while sick and it's pretty hard to not just turn on a DVD eventually. We mostly do our days non- electronically. I encourage and embrace boredom. Boredom is the path to creativity. We do pretty well mostly - we can go a week or more without having the TV on. But boredom is hard to enthusiastically embrace when someone is sick. I felt like crap so he watched two Shirley Temple movies while I knitted on the couch.

Then we made up for it by going out in the back yard for the rest of the day. I drew a chalk outline on the driveway and into the garage for him to follow on his bike. That kept him engaged for quite a while, freeing me up to sit on the grass and continue knitting. Then we sat down around our tree stump circle and had lunch, marveling at the birds who had come round to the feeders. Then he found some boxes in the garage and proceeded to drag them all out, whacking them with his sticks in an effort to scare the birds. That occupied him for a good 45 minutes. It's hilarious to see what he comes up with.

Then when we came back in, I felt exhausted so I put his 'Fireman Sam' DVD on for him while I lamely made dinner.

The problem for me is that when we watch something, he just wants to watch more and more and more. And keeps asking and asking and asking. I know that is a universal problem. For me, it's just a reminder of how insidious the TV can be. It's so compelling, just sucks a person right in. I certainly don't want Magnus' life to play out in front of the box and so, we just keep trudging along, staying outdoors as much as possible and embracing our boredom.

I know, even though he doesn't know it yet, he already appreciates what being at a loose end can produce. It's how things like this happen - the Bubster's stick structure that he made at the park, a month or two ago: 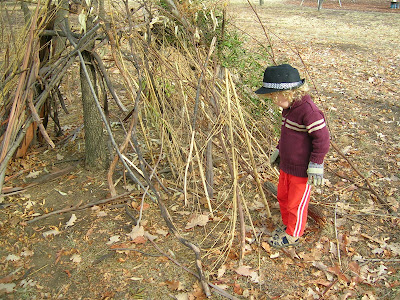 We are slaves to the TV. For years we didn't have one but now we have two, and often they are on. I have lost the TV battle, as with so many other battles.

When Alexander was Magnus's age, i would draw a road/town/airport in chalk & he would play on it with his matchbox cars for an hour or more. Chloe, on the other hand, prefers hopscotch.

You poor love, a head full of snot feels just gross. After having worked in childcare for many years I can tell you that without a doubt it will be the extra bugs Magnus is coming in contact with that are so generously shared. Make sure you do a lot of extra hand washing or sanitising and it may be worth seeing a naturopath for a tonic to help boost your immune system.

As for the television...it can be a great tool if used wisely & selectively. We have quite strict rules about the amount of "screen-time" (whether that be television, computer or video game) our kids have each day. They have an hour before dinner and they can choose what they will spend it on. We don't have the tv on before 8pm (ish) after dinner so they find something to do in that time and are usually engrossed in a game when it does go on.

When illness gets us down we use it more often, we don't have a problem with that. Myles used to often be "bored" as he had been used to watching a lot of tv before I lived with John but it's just great to see him instigate some games...we even build cubbies in the bedrooms still, at 14 & 12, I love it.

Better fly, need to pick Matilda up from a sleepover.