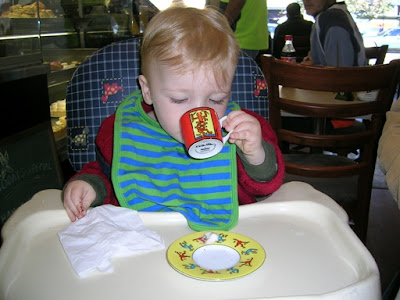 2006 - The first of the weekend Bubbaccino's - check out the pinky finger.
I'm going to combine two 'This is...'s. Last weeks and this weeks! (I'm behind) Last weeks was 'This is.. a work in progress' which I think goes beautifully with this weeks, 'This is.......how I like to spend my weekend'!

To begin, I like to lounge in bed on the weekend, where possible - the man of the house would say, how is that different than the regular week? :-) And usually, that gives way to the urgency of 'Let's get up NOW!!' from the bubster. Then, I answer the question, "is it a 'stool' (school) day today??", about 5 times before it sinks in, no it is not a 'stool' day.

Breakfast of French toast with coffee, followed by a little blogging (me), some playing (bubster), some playing with bubster(the man of the house), and then usually, we go into Civic to do our weekly grocery shop. I usually stop by the Oxfam Shop to salivate over some of the gorgeous things there and usually can't resist getting something small for the bub. 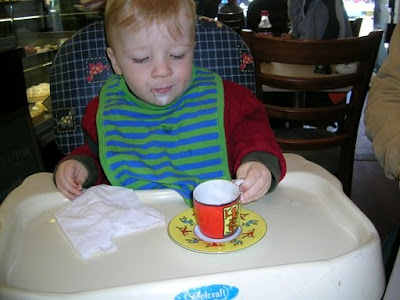 Bubster's first bubbaccino at 16 months, the start of something good.

Then, groceries are put in the boot of the car, we go have some sushi rolls (the bubster's favourite) and then time willing, go ride the carousel, followed by a trip to Borders for coffee (miniccino for Bub, he's moved on from bubbaccino's) and to peruse the magazines. The bubster always picks out a comic book that he can't read (of course, he's only 3 1/2) or National Geographic to search for sharks. The man of the house makes a beeline to the martial arts mags and I settle in to the knitting mags or Art News (as well as anything trashy that features Brad and Ange). 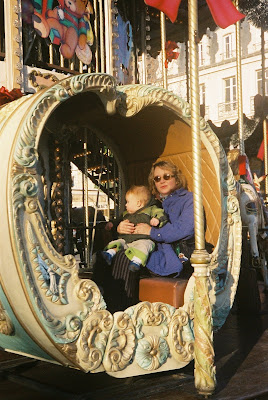 Carousel in France, not Civic, (darn). We like Carousel's.
The bubster is usually pretty beat so this lasts a total of about 15 minutes before he's ready to move, punctuated by a few loud outbursts and screams. Then the men go to read some Thomas the Tank engine stories in the children's section, leaving me to enjoy my moment.

Then home and if I'm lucky some crafting - which brings me to.... This is....a work in progress! Boy, how do you chose?? I know! By chosing only the WIP that you have photos of!!

I've been making aprons out of tea towels to sell at the Bubster's school fair in October. They are super quick to whip up and I think they look sensational. I like the utilitarian look of them. Here's one in use: 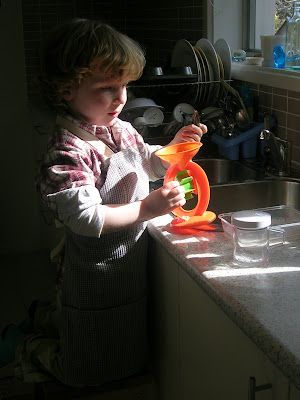 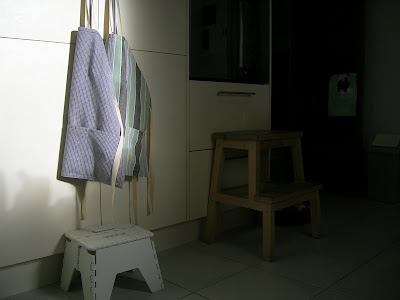 Thank you to The Bird Bath for this weeks 'This is...' theme,
and thank you to Debbie for last weeks theme.
Don't forget to visit Three Buttons for more 'This is...' action!

Love the pinky shot!
The aprons are fab...they should sell really well at the school fair.

Sounds like a great weekend! Love the aprons, a great idea!