......I had one of those moments. Other bereaved parents, and others who have experienced deep trauma, will identify. It was a 'Why did this happen?' moment.

I thought Survivor was on tonight. In my search, flipping through the channels, I hear, "Taylor is a Primordial Dwarf." I flipped no further. The narrator explains that there are around 100 known individuals worldwide living with this disorder.

Because there are no tests to confirm a diagnosis, we can only make an educated guess. But my gut has told me for a long time that our daughter Imogen had Primordial Dwarfism. She had many of the characteristics; discovered to be much too small in our second trimester, extremely small but proportional at birth, lively/awake/feisty, large eyes, large-ish nose, scant hair (it was white too), extremely slow growth after birth.

There are 5 different forms of primordial dwarfism. I realize now that our geneticist didn't tell us about them because there is no way to know which or what anomaly it could be until Imogen was older.

Imogen didn't live to become older. She was put on a ventilator at birth. 8 years ago, all babies under 1000 grams were ventilated; she weighed 500 grams, the weight of a stick of butter or a can of beans. At birth she pummeled the doctor in the arm with her doll like fists and cried her kitten cry. She fought, but ventilated she was. The ventilator destroyed her lungs. She couldn't grow fast enough (because she had primordial dwarfism!) to repair her damaged lung tissue. Her lungs were trashed by the very device that was supposed to help. I can't fault our doctors. They tried very hard. And how does one even begin dealing with such a rare, unknown condition. They have probably never seen this before and probably never will again.

So tonight, as I watched this program, unable to change the channel, I allowed myself to ask just one more time, why. I acknowledged my gratitude for the lives of these other children with this rare condition, allowing me a glimpse of Imogen. And I noted, "That should be 101 individuals worldwide." 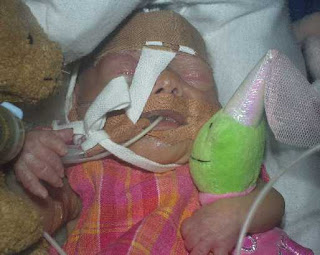 Imogen, cuddling her finger puppet during a rare nap.
Posted by Karin at 11:48 PM

Oh Honey, what a kick in the belly that must have been. One of those moments so compelling that you cannot draw yourself away from it.

Remembering your beautiful Imogen with her biggest eyes and spirit that shone through.

That photo is so beautiful. She looks so happy and peaceful, and cute.

...those moments are magnetic and sometimes offer a catharsis of some small kind. Imogens picture is lovely and i only got that fact it was a finger puppet on my second reading. Shes so tiny and so sweet.

**tears** & love dear friend.
Always remember Miss Mighty.
I love that photo of her...
Small but with a heart as big as could be...
XX

*tears* for your beautiful little girl....

Holding Imogen in my heart...she is precious to many, Karin. I wish, I wish...

What an angel! She will always be in your heart and I'm sure she knew how much you loved her.

I am so sorry you had to say goodbye to Imogen, too soon.She is precious andgorgeous.
I saw that program too - heartbreaking and beautiful , Taylor was very inspiring.