We had fun! It wasn't so bad after all to be a host. We got great feedback. 7 friends arrived just on time. Each child fished their pirate gear from the sharks jaws. I had a lot of fun making this guy.

I tried to paint him with a smile. The pirate gear was a felt pirate hat, eye patch and dagger, made by me for each child. It was hilarious to see their reactions when they saw the shark and then their gear. The pots and pans strung up for our 'banging wall' became a great way to announce each new pirate. Yaaarrrrr!

(Note to self. No paper clips for fishing hooks please (!!) Must I explain "The possibilities" should someone wish to run off with the pole??)

After they got their pirate gear they eagerly tried out the ship and their daggers. 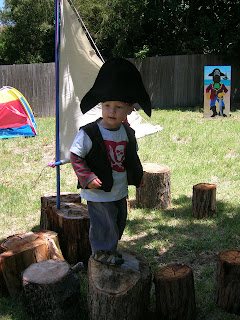 They had fun pulling the sail up and down and engaging in some swashbuckling pirate fighting.

The bubster opened a few presents. This was a sweet moment where he sat down with his friend to open his pressie and then said, "Oh tank you!" Heart burst from mum here! 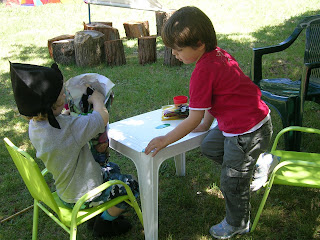 Everyone had fun with the pirate photo board. I got such a kick out of painting again! 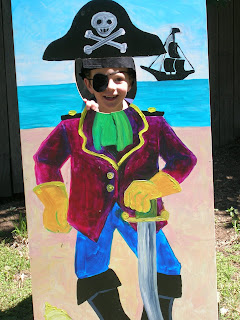 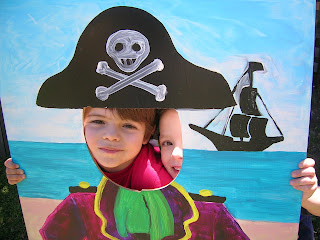 We didn't have any structured activities. They mostly ran around and played. Food was simple; just sandwiches for the kids, homemade punch, guacamole, salmon dip and salsa for the adults (and champagne). We also made some goodies. We were missing the help of a grandma with the food.

The kids seemed to enjoy battering the banging wall and fishing for their treasure through the sharks jaws. 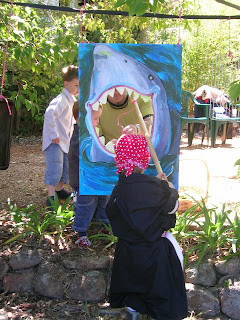 When the timing seemed right, I directed a search through the sandpit for treasure tokens to exchange for ice cream cones.

Then we got the cake ready. 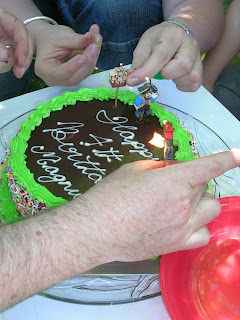 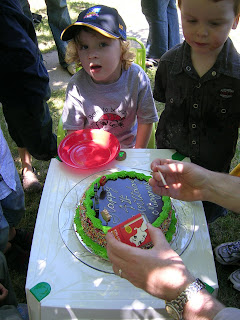 Once everyone was sitting with their cake, I read a pirate story. 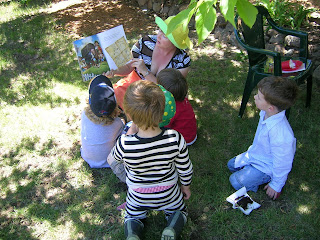 As they were leaving the party, I handed each a party bag that I made. 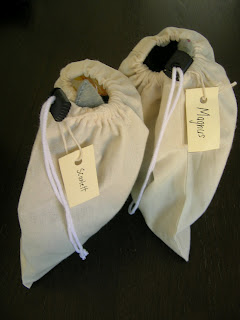 Each bag included chocolate coins, a bouncy ball, a finger puppet and this matching game made from an axe handle. They seemed to really like these tokens. 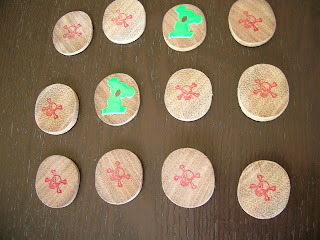 So that is about it! We didn't get any really good photos unfortunately. Many shots are blurred or just not the right timing. It's hard to photograph while directing. But I guess its about the participation, not the documentation. I know they all had a great time. I feel very pleased to have pulled this off!

Fantastic party Karin, you did an amazing job getting all of those activities organised. It's a great idea keeping it relatively unstructured and simple for younger children, it can be really overwhelming otherwise...plenty of time for lots of energy burning and creative play with what you had prepared.

I'm now the veteran of almost 15 birthday parties for Matilda and three for Myles and still find that they like simple. This year Myles had a "Pizza & Pool" party, very easy, I didn't even have to cook for that one and Matilda wanted to take her friends to Yum Cha in the city...that was so easy, all I had to do was pay...!!! It was held in a fantastic little Chinese place right at the top of a 6 level shopping plaza...afterwards the girls wanted to shop and the three adults wanted coffee...that was easy too...!!!

You did good mate, a great job...the Bubster will remember it fondly for a long time.

That is truly fantastic! It sounds like an amazing party! You did a great job!

It sounds like a fantastic party. You did such a great job of creating something truly amazing. Good for you.

wow Karin, hats off to you , arrrrh! looks like a great time! bet you adults sat back sipped your fizz and pretty much smiled the whole party through ,watching them have fun. i love all your ideas, so fun for them and yet simple. i have done every party for both my girls, 14 and 10, at home and they can be tricky if you make them too complicated, they pretty much just love running round in a pack with some food and cake thrown in the mix. bubsters looks smack on perfect. having a boy this time round i will remember your ideas. Im thinking that you've probably just topped the party for 4 yr old list and have other parents in a melt down! LOL Cant wait to see 5.

The big red 'Little Tikes' car got a big workout - didn't get photos of that. Lets just say boys can find some pretty full on things to do with a big ride on car!!!!

Tracy if you are reading, I had a few ride on's around, and yes - fairly wild indeed!!! I managed to corral them....mostly. It was hilarious.

I'm in awe...or should I say aarrrrghhhhh (with a pirate accent) ;-)
Gold star to you Karin. It looked really really amazing. I'm sure you crashed at the end of the day.
Standing ovation coming to you from Sydney!!!!!!!!

wow Karin! You are amazing to pull that all off! Brava!

Congratulations on your great success!!
Were you reading the picturebook of 'How I became a pirates?'?
It's one of 'D's favorite bedtime stories.
My friend in Sydney also spent a lot of time wondering about her son's BP like you, she finally got a big success in holding Ninja party.

This looks like a fabulous party! Heaps of fun! Well done ...