"Santa is really good at his job" 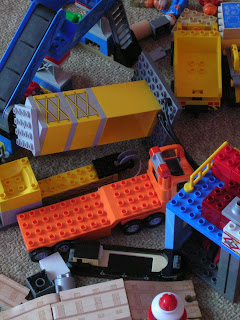 We tried to be corporate free this Christmas but with limited success. Dealing with pneumonia didn't help. Next year should be better in that I hope to have more preparation. It takes me so long to make stuff these days!

Usually we steer clear of the franchise toys - Bob the Builder etc. Lego is another matter. The bubster loves Lego.

Months ago, I purchased this set: 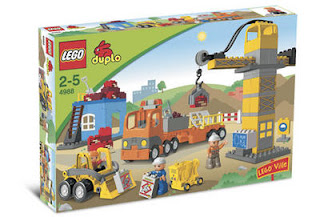 It's a great set, expensive (if you ask me) but really fun. I decided this would be from Santa.

December arrives and we are out shopping when who should we see but Santa. The Bubster sat on his lap and they chatted for a bit. I noticed that Santa seemed bemused by something. Later, I asked the Bubster if he told Santa what he wanted for Christmas. "Oh yes! I told him I wanted a pair of gardening gloves!" Ok, that explains it then. This rather humble gift suggestion would have come as quite a change from the usual!

Christmas comes. Santa leaves his big pressie in the hall for Bub. When he sees it his eyes bug out. He opens it and is totally stunned. Wow................. We put it together and play for a long time before he thinks about the other pressies.

Later on he comes up to me and drapes himself around me, gives me a big hug and says, "You know, Santa is really good at his job. He knew just what I like! This is the perfect present. How did he know that I've wanted this for my whole entire lifes entirety??? I'm going to play with this every day of my lifes." Oh my god, it was all I could do to hold it together and not bust.........

Over December, he's been watching Santa Claus is Coming to Town like it's a documentary film. Then, a few days ago he says, "I've been wondering....... why it is that Santa didn't bring me those gloves... It's what I asked for. How come he got me something different to what I asked??"

I said, "Well, I suspect that he knew that you already had 4 pairs. He probably sent out some elves to check out what you got for your birthday and they took note of your newest pair from Grandma." He's not convinced. I say, "Perhaps he just simply wanted to get you something bigger than gloves. But I'm sure if you asked him again next year, he'll remember." He agreed, "Ok."

Next year, Santa has to lift his game and listen to the small requests as well! Duh!!
Posted by Karin at 8:22 PM

Did you know that Lego is one toy that is exempt from a corporate free Christmas..?? It's one of the best toys ever and the Bubster will play with it in so many, many different ways for many years.

Matilda had (an obscene amount of) Duplo & Lego from an early age and at a garage sale a woman wanted to buy it for her new next door neighbour's children...the family are Afghani refugees.

When she told me who she was purchasing it for I gave it to her along with a number f other toys we had at the sale. I was so thrilled it was going to a home where it would be very much loved. Just before we moved to Brisbane I saw her in the supermarket...she told me how utterly speechless the little boys were when she took the toys in to them. They were 3 & 4 and had never had "real" toys...ever. It did my heart good to hear that it had gone to a home where it was loved.

Her Harry Potter Lego, (while expensive, but purchased it instalments over a few years) gave Matilda thousands of hours of wonderful play...we have just "loaned" it to some friends (Hi Wen & Alice...!!!) and they are equally thrilled to have it.

The Bubster will play with it every day of his life, just as he says.

...and yep...Santa does need to get the small stuff right too...I'm sure he'll remember next year.

My boy is still checking if Santa is coming with pressies tomorrow, how long can it take to wrap up some more he asks me. Sheesh give the poor guy a chance to rest!

ohh lego - i covet finding buckets of the stuff at garage sales. ps.i gave you an award if you're up for these things..

Lego may not be handmade, but it is the best! We had a huge collection but my brother claimed it all for his kids, actually I think he claimed it for himself. He parted credits Lego for his now being an engineer.

lol that is hilarious!

Here is my story -- i wanted to crochet a half-dozen cupcakes for Chloe for Xmas but only managed to make one. So i wrapped up the one & put it under the tree. You can't really play tea party with ONE cupcake but i figured i could sort of promise the rest of them to her.

She opened the cupcake & was very very happy with it....then i said 'i made that, you know, i will make you some more.' And she was *shocked*. She looked at me with these big eyes and said 'but....how did you get it to Santa so he could put it under the tree?'

He's such a funny little chap. I love reading his conversations.

"...he's been watching Santa Claus is Coming to Town like it's a documentary film"

Oh my goodness, he's such a character, I nearly wet myself with laughter reading your post! Remind me to do those Kugel exercises before reading more Magnus quotes...

Glad your son is enjoying Lego. It drives me mad, personally, but it is an essentially part of childhood. With love, Alice