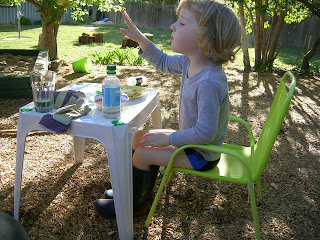 I've been meaning to post a typical story as told by the Bubster. My goal is to illustrate these stories of his. I think they are wonderfully surreal. Some of you have heard this one already. :-)

As told to me during our walk home from the doctors one day.
December 08. Bubster - just 4.

In relationship to nothing in particular, the Bubster chimes:

"Oh yes, that reminds me of the time I went to the theatre with my 'fwiend', Monkey. (pronounced - Montkey) I went with all my fwiends - Big Bear, Montkey, Tedd, Roku - and we all sat down in our own seats to watch the show and it was all full of other boys and their fwiends and 'nanimals' and we watched dancing and singing and after the show we had 'take' (cake) and watched TV! I was 'inerstereted' (interested) in the 'take' because it wasn't chocolate 'take' like I thought it would be but it was wine 'take'!"

"Oh! It was on the 16th of 'tristmas' (Christmas). We had to go to Montkeytown to see it. It started 15 minutes after the sun settleded. You weren't there. Neither was 'Tieron' (that's daddy). My fwiends and nanimals lookeded after me. You missed out. Too bad!"

I say, "Yeah, gee. It sounds like it was a pretty good show will all that dancing."

"Oh yes. Very good. It all happened just before the 'Dearthquake'."

Me, "Oh, there was an earthquake?"

"Oh yes. It was a big dearthquake and we all had to run out of the theatre before it came falling downed on us. Lots of other montkey's jumped in cabs and on motercycles and stuff, some even flew away! but some just had to run behind. Some thought they could survived and kill the deathquake but they couldn't so they dieded. Then a rocktet flew over and some men in the rocktet saw the deartquake in Montkeytown and so they landed and jumped out to help! One man had a cigarette but all the others just wore hats. They picked up all the montkeys and then flew in their rocktet to Sydney. All but one montkey. My fwiend, montkey, they gave to me! The dearthquake never ended but they were all safe! And that is the end! Isn't that inerstereting?"

Me, "Oh wow sure is. How frightening."

Then he chimes, "Did you know that poo talks??"

Absolutely brilliant! What an imagination he has and I love the details he goes into - one of the men had a cigarette and the rest had hats! What an amazing little boy you have!

Ha! Oh, now I want to know about the poo! Your bubster's stories remind me of the tale told by this beautiful little girl: http://flightlessboyds.blogspot.com/2008/12/oh-my-this-little-girl-telling-long.html


By the way, thank you for your very kind comments on my blog :-)

Oh my goodness, my poo nearly talked too I was laughing so hard...

He will write & you will illustrate stuff for sure. You can't BUY that stuff...

Please put up a warning before you post stuff like that. I need to prepare my bladder...

Hee hee, that's a wonderful story. I like the flying monkeys and the man with a cigarette (but just one). You could do some pretty fantastically surreal drawings for that!