The bubster loves gloves. Here he is at 20 months, working out in the garden wearing one of his earliest pairs of gloves: 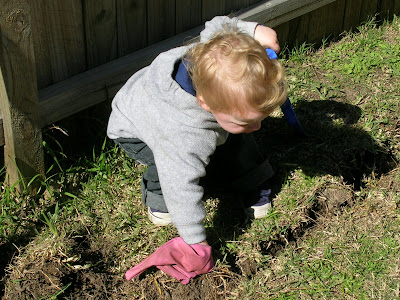 Rather large-ish that pair..... But no matter, if there is a pair of gloves around, he will claim ownership.

So he sits down at his little table and starts cutting. He first thinks that maybe he will make the fingers by stabbing the cloth with a fork. I explain how that will make fingerless gloves not gloves with fingers. Oh....Well then, that won't do. He wants fingers..... hmmm.......

So I explain how we could trace around his hand and cut out two pieces, one for the top of his hand and the other for the bottom. We need two pieces for each glove. He decides I'm probably right about that, it seems a good approach and we proceed.

Once we have finished tracing, I explain how we need to leave a margin of fabric around the tracing so that we have room to sew the pieces together. He grasps the concept and starts cutting. He carefully cuts out his pairs, concentrating very hard on the precision. Then when he is finished he announces, "I'm ready for a needle, Mummy. I need a needle." So I get him my big blunt tapestry needle. He remarks that it is 'just like the needle at school!'

He then, with great concentration and effort, proceeds to sew up the edges. He does a really damn good job, even if I do say so myself. I was impressed. He got tired halfway through so I finished the second glove for him. I was dying to take some photos of him but I didn't want to disturb his concentration. Just picture if you will, a little adorable blond haired boy, 4 years old, sitting at his little table, feet crossed, carefully and steadily drawing a needle through some work.

And here are the gloves! 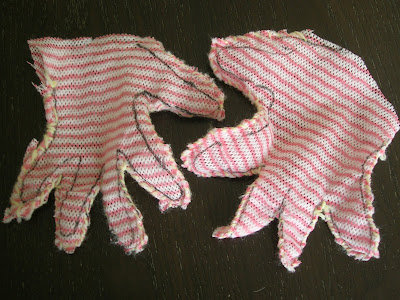 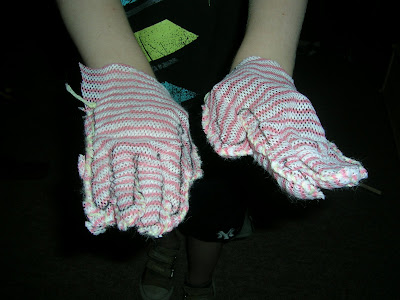 The most gorgeous gloves I have seen. Nice work bubster!