What happens when the greats are gone

I'm behind in my news. Especially dance news. I just learned last night that Merce Cunningham died on 26th July, 2009.

Perhaps the death of an influencial American choreographer isn't something that makes the headline news in Australia. I wouldn't know because I don't have much time to read the papers to find out. But to find myself so out of the loop came as a jolt. I feel like the last person on earth to know.

I learned of his death when I finally curled up to listen to a Fresh Air with Terry Gross Download - Merce Cunningham - A Life in Movement. I thought it would be about Merce's recent work at BAM -"Nearly Ninety". Instead, I hear he has died. Even though he was 90 years old, it came as a shock to me. Merce just seemed like someone who would live forever.

I never knew Merce personally, but I have met him. His work greatly influenced me. The first time I met him I was 13 years old and had yet to take my first ballet class. I had no idea who I was meeting. Only in retrospect have I realized who I'd met that night in upstate New York in 1976 with my Aunt Lavonne. She had taken my mother, father and I to see the dance company for whom she had worked in NYC. She had done administrative work while completing her masters in Sculpture at Pratt. My aunt was, and still is, a very groovy and cool chic.

I remember the performance being like nothing I had ever seen before, nor was it anything like what I thought dance should be. Being an almost 14 year old from South Dakota with the preconception that dance was limited to the ballet or to musicals meant that I had no formal preparation for what I was about to see. The movement was bizarre to me and the music, even more so. Merce was interested in movement for movement sake, not to tell a story. But I didn't understand that then. My dad fell asleep and snored loudly. It was moritfying on a cellular level. It was hard to concentrate with that going on next to me. The embarrassment I felt from that point onward paralyzed me and I could barely cast my eyes toward the dancers. But. I remembered. Deep down, I remembered and connected on a visceral level.

After finally convincing my mother that I really did want to take dance class, I began at age 16 and devoured it. I'd forgotten all about that odd company in NY and immersed myself in everything ballet.

Fastforward to art school in the 80's. Modern dance happens for me for the first time. It was all because of being presented with that potentially fortuitous human dilemma, 'a fork in the road'. I couldn't get into the ballet class I wanted and so was offered a spot in a modern technique class. At first I was dissappointed but I accepted. I was the only art school student allowed to take class at university (UMKC) with the fulltime dance majors. I'd rush over after my morning studio classes at KCAI, take a modern dance class, then rush back to afternoon studio. That first summer, I attended my first summer workshop in dance. Helen McGehee was the artist in residence. She had been a prominent dancer with the Martha Graham Dance Company. It was my first time learning the Graham Technique. She was probably close to 60 years old at the time and she could still lift her leg up to her ear. I said to myself, Holy cow. That is what I want to be like when I'm her age.

I was introduced to the Cunningham Technique during those 4 years as the "art student" at UMKC and then later in the late 80's, at the Harvard Summer Dance Program. I loved it. I was a member of the Susan Warden Dancers by then, a modern dance company based in Kansas City. Susan was influenced by the Graham Technique although her work was a complete departure from it, using improvisational structures to create movement phrases which were then used within a set work. Through Susan's vision and mentoring, I learned how to look at dance, how to see, how to infuse movement from within. I loved this time in my life with Susan.

During those years, we had the privilege of seeing Merce Cunningham's company perform on many occasions. Merce still performed with his dancers in those days. He could barely move due to arthritis, hobbling around, yet he was by far the most riveting performer to watch. His eyes penetrated out into the audience in a way that made one feel pulled directly to him. He seemed to glow from within. My friend Tracey took this photo from the back of the theatre during a performance. Merce is in the middle. 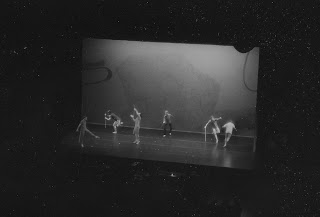 In NYC, I went to every performance I could during my 5 1/2 years there. In total, I've probably seen the company perform well over a dozen times. Merce's work liberated my mind. I felt free to draw my own conclusions instead of having them spelled out for me. Sometimes a work would leave me feeling wistful, tearful. Other times, restored. One image sticks in my mind of a beautiful male dancer, standing perched over one leg, undulating his arms this way and then that for an extended period of time. There was something very pure about the movement. He embodied it to the degree that it could call to mind infinite possibility. Was he a bird or was he a man drowning. Perhaps both or neither. One never knew how a Cunningham work would feel until there, experiencing it in the moment.

The last I saw of Merce was probably in 1995 when I worked at the Union Square Greenmarket selling cut flowers. He used to come by once in a while to shop. He could not walk well and stopped often but he stood out vividly to me nontheless. In my memory, I see the twin towers in the background, Merce heading off with his purchases and thinking, wow, there goes one of the worlds greatest choreographers and I just sold him flowers. When I was first in Australia and presented an evening of my own work for the first time, the reviewer slammed the work for being old fashioned, "Like Merce Cunningham". I couldn't have imagined a better compliment.

Now I'm a mom living in Canberra, overweight and undernourished in the world of dance. It's confusing to be so removed from a life I once knew so well. But my life took another fork in the road and that is why I am who I am today. And there will be more forks, perhaps one that brings me back again.

Judith Mackrell of the Guardian, asks this question - Who will protect the legacies of Pina Bausch and Merce Cunningham?

And that brings me to another shocking discovery. You mean Pina Bausch has died too? The end of an era seems well and truly underway. I wish my husband and son could have seen these luminaries.
Posted by Karin at 8:53 AM

not sure what to say, but i will say lovely post. For someone who HAS NO INTEREST INADANCE WHATSOEVER, i read all that with great interest and felt something akin to understanding. Youre a great writer.

I'm trying to come up with words for this but ....well, it's just too perfect. There is nothing to say but

The image of him walking away with the twin towers in the background, and now they are all gone, all three of them. I never saw the towers while they stood, NYC felt like some far away fairyland that I wasn't quite sure existed. Stories like these, so commonplace, remind me they were real, with real life mundane memories. Something real is gone.

Karin, this is a truly lovely remembrance of Merce. I read your words and felt very similar responses when first seeing Merce's work - much later than you, 1997 in Paris although we are similar age I think. He was one of those very special artists, you're very lucky to have been introduced so early. I brought Merce twice to Australia, Perth, in 2001 and 2002 when I was director of the Perth Festival and so knew him at a little distance over the past decade. I have just returned from overseas but like you have seen nothing lamenting or marking the passing of his death here which is a sad statement in itself. Very pleased to have read your very honest words this morning, wish you well with everything.

Thank you, friends. Kel, Thanks for your comments. I'm glad that my writing sparked your interest. I used to write more about dance, I enjoyed it. It was a real jot for me to try to write again now about Merce.

Tracy, I know. My memories of New York always include the towers. I wasn't there when they came down. Whenever I've been back the empty space is what strikes me. It reminds me of the empty spaces that our children who died occupy. The lack of existence is as real to me as the existence.

Sean, thank you so much for taking the time to respond. I was so touched to read your words. I wonder how Perth audiences responded to Merce's work. I read an article in my recent trawl that described it as 'big city work'. That made sense to me. His work exemplifies for me all that I loved about NYC - being able to see a Phillip Glass production with ease, or Trisha Brown, Lucinda Childs, Bill T. Jones, Yoshiko Chuma, Sankai Juku, Pina, or the Limon company dancing to a fully orchestrated Faure's Requiem. Amazing. When I moved to Australia, what struck me was a need for Australian choreographers to make work that was 'uniquely Australian'. I didn't understand that because dance seems a universal language to me not a regional one. (no offense to my Aussie buddies, just a newcomers observation.LOL)I think that is one reason I had a hard time getting established. I don't know what it is like now because I've fallen out of the scene.

I read that Merce had specified in his will that the company go on a world wide tour for two years after his death and then to disband. He specified that he wanted NYC tickets to be no more than $10 each. A really lovely gesture I think. I hope the company comes to Australia on this planned tour.