Right Where I am Project: 12 years and one day 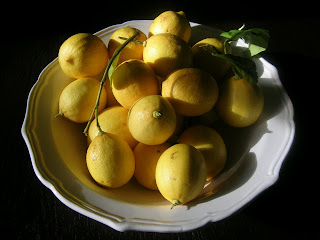 Lemons from our lemon tree. Usually there are just one or two worthy of picking. This year, a full tree. When life hands you lemons, make lemonade. Well, I chose to make several tart lemon custards instead.
This post is written as participation in Angie's, from Still Life With Circles, very beautiful blog project, Right Where I am. Such a good idea. Thank you. It's bringing me out of my blog hibernation.
Yesterday was Søren's 12th birthday. Søren was born 12 years ago but died 2 1/2 days later from an ecoli infection that he contracted before birth. 12 years sounds like a long time doesn't it. 12 years. It feels both near and far. Time is weird isn't it.
I've been spending the last few days looking at my old journals and the photos of Søren that we have - so few, never enough, never enough. Shouldn't there be more? I always wish I could find one that I didn't know about, to just turn over a page, and surprise! Wow! A new photo. I'd like this mystery photo to be perfectly clear, the result of a steady hand capturing the details of our beautiful boy, not the shaking, shocked hands that tried desperately 12 years ago to find, through blurry eyes, the right moments to save. I'd also like this camera to be a sharp, finely tuned digital camera that could have captured his long long eyelashes, or his beautifully shaped mouth, or exquisite brow, or compact little ears or his long fingers. Perfect.
But we didn't have this. And we don't have the mystery photo now. As absurd as it sounds, I have to  periodically take the time to feel the disappointment of no new photos, even though of course I know that all the years of my life will be lived without a new photo. And really, it's the 12 year old I want to see.
I know too that my blurry or disappointing images are better than no image, which is what my sister got. Nothing. No photos. She didn't even get to hold her daughter.
In Søren's journal I found this entry, written sometime within the first month of his death; I didn't have the energy to date it:
She (our nurse) asked me if I was getting to spend time with you whenever I wanted. I thought it was a thoughtful question. Some people I expect, would be uneasy about being around a dead baby. I never thought I would have to face such a possibility in such an intimate way, to ever have to consider what it meant. I discovered though, that being with you made me feel calmer for a time. It was reassuring to know that you actually existed, were real. That you had weight and substance. That you filled my arms in a certain way. I could sit and look at you for hours, your eyelashes, your fingernails, your mess of a nose, beaten by the ventilator. Without this time with you, it's just a perpetual nightmare that should be happening to someone else. I could hold you and know that you were real and simultaneously know that you were gone.
12 years later, the hold is still there. The connection I made with other mothers from that time is still there. I still remember. I still wonder. Somedays I wonder a lot. Other days less so. So much other loss has occurred during that 12 years; Imogen, Heloise, Roku and Seven. Sometimes it's a blurry overwhelming mess of loss which defies description. Other times, it's more matter of fact, it's my life. It's part of my large tapestry that takes a lifetime to create and complete.
And our special gain too; Magnus. Our cherished lad has been wonderful and challenging at the same time. I'm discovering (well it's not that much of a surprise but I finally have some resources) that he's a highly sensitive child and have been spending time learning about that as well as about audio-processing disorder. I haven't really had energy to write about this side of daily life or even known what to say about it. Some days are actually really hard and I feel like a crap parent with no sense of patience or consideration. It's hard, by no means as hard as my losses but hard none-the-less. I've been eating a lot of tart lemon custard.
Yesterday for Søren's birthday we watched Star Wars and played with our Star Wars lego. Magnus made an ice cream cake with sprinkles, all by himself. I was so proud of him.
The final scene in The Return of the Jedi, where Luke looks back and sees Obiwan Kenobi and Anikin watching over him from the world beyond always squeezes my heart. If our children could see us, I hope they would be proud.
Posted by Karin at 12:48 PM

Thanks for sharing some precious memories with "Blog world"...I always feel so *teary* reading your powerful thoughts about life & death...shared gently & openly with us...so much, too much loss...

I just had to steady myself on my chair to read that it was Soren's 12th birthday! Wow Karin...

I have typed & changed what to say about ten times now, so I should just send this really. There are never enough words, or the right words that are able to say exactly what we want sometimes, but they are all we have via the internet...if I was there tonight I'd bring over a nice bottle of red & give you all a (((hug))).

Oh Karin, such amazing, heartfelt, beautiful words. Hugs and love to you.

Hi Karin, I only just read this blog of yours. Isn't Magnus lucky to have a great Mum like you and sounds like you are doing an amazing job of making tart lemon custards out of lemons (literally and figuratively!) Hope we can catch up again sometime. Karen (Enviromum)

Great steps to learn more Thanks a Lot for this nice information , I love to visit again to see this amazing post to learn more , Thanks a Lot.I am also a pearl jewelry blogger.If you get a chance pop up by my page, maybe you would like freshwater pearl bracelet. i wish article about wish pearl will be seen from you.

Buy Vyvanse Online
Vyvanse is one of the worlds leading drugs now
Purchase Vyvanse Online. Lisdexamfetamine is utilized to treat consideration deficiency hyperactivity issue (ADHD) as a feature of a complete treatment plan, including mental, social, and different medications. It might expand the capacity to focus, remain centered, and quit squirming. Lisdexamfetamine may likewise be utilized to treat voraciously consuming food issue (BED). It might lessen the quantity of voraciously consuming food days.
Vyvanse Doses Buy Vyvanse Online
The dose of Lisdexamfetamine depends on your ailment and reaction to treatment. Your PCP may alter your portion to discover the portion that is best for you.
Click here to read more
Adhere to your primary care physician’s directions cautiously. On the off chance that you are taking the chewable tablet, bite the tablet altogether and after that swallow.
For Vyvanse , If you are taking the container type of this drug, gulp down the case.

Welcome to https://juulpods.org/,your number one electronic cigarette also known as e-cigarette among other names such as buy Juul Starter Kit, is a handheld battery-powered vaporizer that simulates smoking and provides some of the behavioral aspects of smoking, including the hand-to-mouth action of smoking, but without burning tobacco. buy juul pods online Store USA is stock with two of the most used e-cigars both national and international brands such as buy phix juul pods. Whether you are looking to buy juul online or buy PHIX online, or want to shop for cheap juul pods online, buy juul silicone case for sale, Juul Pods Online Store is here to provide you with just what you need. We strive to be the best online vape shop and offer only the best of the best.